The definitive guide of Symfony 1.0

You may often need to include some HTML or PHP code in several pages. To avoid repeating that code, the PHP include() statement will suffice most of the time.

For instance, if many of the templates of your application need to use the same fragment of code, save it in a file called myFragment.php in the global template directory (myproject/apps/myapp/templates/) and include it in your templates as follows:

But this is not a very clean way to package a fragment, mostly because you can have different variable names between the fragment and the various templates including it. In addition, the symfony cache system (described in Chapter 12) has no way to detect an include, so the fragment cannot be cached independently from the template. Symfony provides three alternative types of intelligent code fragments to replace includes:

Note Another code fragment type, called a component slot, is to be used when the nature of the fragment depends on the context (for instance, if the fragment needs to be different for the actions of a given module). Component slots are described later in this chapter.

The inclusion of these fragments is achieved by helpers of the Partial group. These helpers are available from any symfony template, without initial declaration.

A partial is a reusable chunk of template code. For instance, in a publication application, the template code displaying an article is used in the article detail page, and also in the list of the best articles and the list of latest articles. This code is a perfect candidate for a partial, as illustrated in Figure 7-2.

A template can include partials whether it is in the same module, in another module, or in the global templates/ directory. Include a partial by using the include_partial() helper, and specify the module and partial name as a parameter (but omit the leading underscore and the trailing .php), as described in Listing 7-7.

Partials have access to the usual symfony helpers and template shortcuts. But since partials can be called from anywhere in the application, they do not have automatic access to the variables defined in the action calling the templates that includes them, unless passed explicitly as an argument. For instance, if you want a partial to have access to a $total variable, the action must hand it to the template, and then the template to the helper as a second argument of the include_partial() call, as shown in Listings 7-8, 7-9, and 7-10.

Listing 7-8 - The Action Defines a Variable, in mymodule/actions/actions.class.php

Listing 7-9 - The Template Passes the Variable to the Partial, in mymodule/templates/indexSuccess.php

Listing 7-10 - The Partial Can Now Use the Variable, in mymodule/templates/_mypartial.php

Tip All the helpers so far were called by <?php echo functionName() ?>. The partial helper, however, is simply called by <?php include_partial() ?>, without echo, to make it behave similar to the regular PHP include() statement. If you ever need a function that returns the content of a partial without actually displaying it, use get_partial() instead. All the include_ helpers described in this chapter have a get_ counterpart that can be called together with an echo statement.

In Chapter 2, the first sample script was split into two parts to separate the logic from the presentation. Just like the MVC pattern applies to actions and templates, you may need to split a partial into a logic part and a presentation part. In such a case, you should use a component.

A component is like an action, except it's much faster. The logic of a component is kept in a class inheriting from sfComponents, located in an action/components.class.php file. Its presentation is kept in a partial. Methods of the sfComponents class start with the word execute, just like actions, and they can pass variables to their presentation counterpart in the same way that actions can pass variables. Partials that serve as presentation for components are named by the component (without the leading execute, but with an underscore instead). Table 7-1 compares the naming conventions for actions and components.

Tip Just as you can separate actions files, the sfComponents class has an sfComponent counterpart that allows for single component files with the same type of syntax.

For instance, suppose you have a sidebar displaying the latest news headlines for a given subject, depending on the user's profile, which is reused in several pages. The queries necessary to get the news headlines are too complex to appear in a simple partial, so they need to be moved to an action-like file--a component. Figure 7-3 illustrates this example.

For this example, shown in Listings 7-11 and 7-12, the component will be kept in its own module (called news), but you can mix components and actions in a single module if it makes sense from a functional point of view. 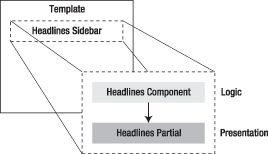 Listing 7-11 - The Components Class, in modules/news/actions/components.class.php

Listing 7-12 - The Partial, in modules/news/templates/_headlines.php

Now, every time you need the component in a template, just call this:

Just like the partials, components accept additional parameters in the shape of an associative array. The parameters are available to the partial under their name, and in the component via the $this object. See Listing 7-13 for an example.

Listing 7-13 - Passing Parameters to a Component and Its Template

You can include components in components, or in the global layout, as in any regular template. Like actions, components' execute methods can pass variables to the related partial and have access to the same shortcuts. But the similarities stop there. A component doesn't handle security or validation, cannot be called from the Internet (only from the application itself), and doesn't have various return possibilities. That's why a component is faster to execute than an action.

Partials and components are great for reusability. But in many cases, code fragments are required to fill a layout with more than one dynamic zone. For instance, suppose that you want to add some custom tags in the <head> section of the layout, depending on the content of the action. Or, suppose that the layout has one major dynamic zone, which is filled by the result of the action, plus a lot of other smaller ones, which have a default content defined in the layout but can be overridden at the template level.

For these situations, the solution is a slot. Basically, a slot is a placeholder that you can put in any of the view elements (in the layout, a template, or a partial). Filling this placeholder is just like setting a variable. The filling code is stored globally in the response, so you can define it anywhere (in the layout, a template, or a partial). Just make sure to define a slot before including it, and remember that the layout is executed after the template (this is the decoration process), and the partials are executed when they are called in a template. Does it sound too abstract? Let's see an example.

Seeing some code will clarify things further. To include a slot, use the include_slot() helper. The has_slot() helper returns true if the slot has been defined before, providing a fallback mechanism as a bonus. For instance, define a placeholder for a 'sidebar' slot in the layout and its default content as shown in Listing 7-14.

Listing 7-14 - Including a 'sidebar' Slot in the Layout

Each template has the ability to define the contents of a slot (actually, even partials can do it). As slots are meant to hold HTML code, symfony offers a convenient way to define them: just write the slot code between a call to the slot() and end_slot() helpers, as in Listing 7-15.

Listing 7-15 - Overriding the 'sidebar' Slot Content in a Template

The code between the slot helpers is executed in the context of the template, so it has access to all the variables that were defined in the action. Symfony will automatically put the result of this code in the response object. It will not be displayed in the template, but made available for future include_slot() calls, like the one in Listing 7-14.

Slots are very useful to define zones meant to display contextual content. They can also be used to add HTML code to the layout for certain actions only. For instance, a template displaying the list of the latest news might want to add a link to an RSS feed in the <head> part of the layout. This is achieved simply by adding a 'feed' slot in the layout and overriding it in the template of the list.

Where to find template fragments People working on templates are usually web designers, who may not know symfony very well and may have difficulties finding template fragments, since they can be scattered all over the application. These few guidelines will make them more comfortable with the symfony templating system.

First of all, although a symfony project contains many directories, all the layouts, templates, and template fragments files reside in directories named templates/. So as far as a web designer is concerned, a project structure can be reduced to something like this:

All other directories can be ignored.

When meeting an include_partial(), web designers just need to understand that only the first argument is important. This argument's pattern is module_name/partial_name, and that means that the presentation code is to be found in modules/module_name/templates/_partial_name.php.

For the include_component() helper, module name and partial name are the first two arguments. As for the rest, a general idea about what helpers are and which helpers are the most common in templates should be enough to start designing templates for symfony applications.